Our three-year Bachelor of Arts degree provides an excellent foundation for students who wish to explore music as a career by developing the fundamentals of performance, theory, and musicianship. We strive to create an inclusive, learning-centred experience, which involves all music students at a comfortable level. Development of reliable performance skill is nurtured through weekly performance classes, where you will discover and develop your musical voice. We offer courses in performance, audio arts, conducting and a variety of music theory courses. We also provide an extensive variety of jazz-based courses. Performance courses are offered in the following areas: piano, organ, guitar, voice, violin, viola, cello, string bass, flute, oboe, clarinet, saxophone, bassoon, trumpet, horn, trombone, tuba, percussion, jazz piano, and jazz guitar.

Our music faculty demonstrate a profound commitment to their craft through continued national and international active recording, teaching and research careers. We train young musicians to embrace their chosen art specialty as a vital, living language. When words fall short – music takes over! At Algoma U, we believe that music is an essential part of the human experience.

What You Can Expect

Study the instrument of your passion

Our ensembles, the Algoma University Choir, Jazz Ensemble, and Music Theatre Ensemble, are very active within the local community, and provide our students with ample opportunity to perform at public venues.

In our program, students will study the iconic historical figures and their musical influence on society, including Ludwig van Beethoven, Johann Sebastian Bach, and Wolfgang Amadeus Mozart.

The Algoma Conservatory of Music is a non-profit music school affiliated with Algoma U. It has become one of the highest quality concert series in North America, attracting the best performers from around the world. 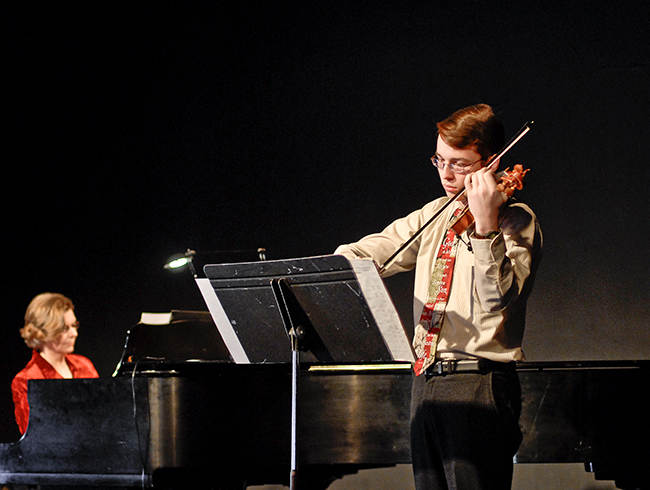 For more detailed information on our courses, please visit our courses schedule section

Are you ready to apply theory and academic content to real-world experiences? It's time to make your plan! Preparing for your audition

Students applying to our Music program must audition as part of the application process. Audition requirements vary greatly by the instrument. Our Department of Music is made up of faculty who are experts in the field. Get to know them! Turgeon is a featured pianist in the NPR television documentary “Two Pianos – One Passion”, and major North American radio stations including MPR, WPR, WQXR, WGBH, CBC Radio I and II.  International broadcasts include Dutch Public Radio, radio documentaries on BBC Radio I and II and the Australian Broadcasting Corporation. Turgeon was recently invited to join the international roster of Steinway artists.

Dr. Turgeon’s college, conservatory and university work has included Associate Professor of Music and Artist Faculty in Collaborative Arts at the HARID Conservatory, Associate Professor of Music, Director of Keyboard Studies, Director of Collaborative arts and ensemble-in-residence at Florida Atlantic University’s Dorothy F. Schmidt College of Arts and Letters, School of the Arts, Boca Raton, Florida. He is a Founding Teacher for Royal American Conservatory Examinations, the National Music Certificate Program, and the Carnegie Hall Achievement Program. Turgeon has served as senior examiner for the Royal Conservatory of Music’s College of Examiners since 1990.

‌Frank Deresti received an Honours Bachelor of Music in classical guitar performance from Carleton University in 2000. Since then, he has maintained an active schedule as a performer, composer, teacher, and recording artist. He performs regularly as a guitarist, bassist, and multi-instrumentalist with various ensembles, covering a wide range of styles and genres.

To date Frank has appeared on at least a dozen released recordings and has performed hundreds of live shows with various local and Canadian artists.

Frank is also an instructor of guitar, bass, and music theory at the Algoma Conservatory of Music, where he is also the founding director of the Conservatory Guitar Ensembles; and an Adjunct Professor of Music and Jazz Studies Coordinator at Algoma University.

Canadian pianist, Anne Louise-Turgeon earned a Bachelor of Arts in Piano Performance from the University of Toronto (1989) and an Eaton Award for top graduate. That same year she joined the keyboard faculty at Algoma University College in Ontario, Canada.  She completed graduate studies at Yale University School of Music, earning her Master of Music (1993), Master of Musical Arts (1994), and Doctor of Musical Arts (2000) degrees in piano performance, as well as the school’s highest graduating honor, the Dean’s Award. Dr. Turgeon also holds a Master of Arts Degree (2009) in composition from Florida Atlantic University.

Dr. Louise-Turgeon has been a member of the Royal Conservatory (Toronto) College of Examiners, and faculty member at Mount Holyoke College, Yale University, Algoma University College, Algoma Conservatory, and the Harid Conservatory. Dr. Turgeon serves as Co-President of the World Piano Teachers Association, Florida chapter, keyboard faculty and ensemble-in-residence member at Florida Atlantic University. She has served as adjudicator for regional, national, and international competitions, including the Dranoff International Two Piano Competition and the Canadian Music Competition.

Agnes McCarthy is a Senate Adjunct Professor of Voice at Algoma University where she teaches private voice, Musical Theatre Ensemble and Elementary Music Methods courses. In addition to her work at AlgomaU she is Director of Sault Ste. Marie’s newest performing arts studio The Northern Arts Academy, providing comprehensive interdisciplinary training for singers with diverse musical interests. Agnes also serves as a music specialist with the Algoma District School Board.

After completing her B. Mus. / B. Mus. Ed. degrees at Memorial University of Newfoundland, Agnes moved to Montréal where she completed a Master’s Performance degree in Early Music Performance at McGill University in the studio of Canadian countertenor Allan Fast. She then relocated to Sault Ste. Marie as part of the Artist in Residence Program at Algoma University and has since served in the capacities of performer, voice instructor, choral conductor and coordinator of the vocal division of the Sault Ste Marie Music Festival. Agnes’ choirs and private students have distinguished themselves by winning numerous national awards, and many have gone on to professional careers.

Agnes has spent her professional career in Sault Ste. Marie deeply involved in the musical life of the community as a teacher and performer. She has collaborated with The Algoma Conservatory of Music, The Sault Symphony, The Algoma Chamber Players, The Chamber Singers of Algoma, The Algoma Festival Choir and with The Musical Comedy Guild of Sault Ste. Marie as Vocal Director for their productions of Les Misérables and Jesus Christ Superstar. She is also active as a choral and voice clinician and festival adjudicator.

Paul Dingle began his musical journey studying harpsichord and early music in England with Valda Aveling and Edgar Hunt at Trinity College London. A Bachelor of Music degree in musicology at Memorial University of Newfoundland followed, then a Master’s Performance degree in piano at Brandon University. Upon returning to his native Newfoundland, he founded and was Artistic Director and Conductor of the Terra Nova Chamber Players, a professional orchestra specializing in Baroque music. Paul was also a composer and performer in the experimental multimedia group Fusion, an ensemble dedicated to high-technology arts productions involving analog, digital and hybrid synthesis, as well as a contributor to Sound Symposium, a biannual festival of new music, art, and dance. Paul’s first recording for CBC
FM radio broadcast in 1976 as a young pianist was his introduction to the world of audio and recording technology, an experience that has become a lifelong passion. Later studies in recording technology, acoustics and psychoacoustics led to a research interest in the historical interface between music and technology, and how the two have always been inextricably entwined in the formation of new styles, form, content, perception, medium and sense of narrative.

His research interests include South Asian music, North American indigenous music, the interaction between Asian spirituality (particularly Buddhism) and music, and jazz. He has carried out extensive fieldwork in both India and northern Ontario. At Algoma University he teaches Music Theory, World Music, Native Music, The Sociology of Music, Romantic Music, Twentieth-Century Music, and Studio Piano. He spends much of his spare time camping, fishing, hiking and cross-country skiing.

For those who choose to enter the workforce upon graduation, below is a list of some of the career paths our graduates have chosen or can choose with a music degree.

Applying to Algoma U is simple, fast, and easy

Get started now Back to programs

Read about what research is happening at Algoma U “Where else would you find professors who encourage you to step outside of your comfort zone because they know you will do great and achieve success?! Everything is going so well here, I cannot imagine having these opportunities anywhere else.”

“Upon my arrival at Algoma University, I was greeted by the most amazing unit of musicians who hold so much itelligence and real life experience to offer at all times. I have gained an incredible amount of knowledge through this program, and some of my experiences include being a part of many Algoma University Ensembles (Choir, Musical Theater. Jazz Ensemble), singing for keynote events, as well as performing with Professors at Carnegie Hall in New York City! This program is a community, and being part of this Music family has been a blessing” “At Algoma University, Music isn’t just another department, it is family. The one-on-one interactions and support that I received from the team of professors at Algoma is something that I do not think I will ever receive again. The Music Program offers something special that other departments cannot.”

“Algoma University is a great place for those who seek higher education. The Music Faculty were great and always helpful when I needed it. The Music Program really helped me develop as a musician and prepare for medium and long term educational and artistic goals”

“AU features an excellent, personalized Music Program. The faculty care about you and your progress. Small classes lead to strong bonds with classmates and teachers. There is a high expectation, yet goals are attainable, and reasonable in the context of such a supportive and creative environment. The high level of education and absorbed wisdom can be applied to everyday life. This program helped me find myself via artistic expression through my instrument. Bonds forged with like-minded individuals will last a lifetime. ”